Joseph Carrillo's Black Beach Cruiser was stolen while the Star's bike was parked on his front porch and or deck. 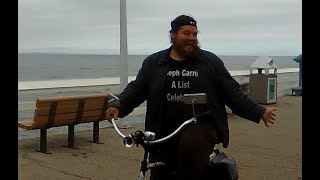 This seems reminiscent of a 2010 political prank on Joseph Carrillo


If you are interested in interviewing this talented Singer-songwriter about his music and performances or booking a performance, email josephthecelebrity@gmail.com or view his press kit at http://www.josephwcarrillo.com/press.html